When you see the images go and research the places labelled to gain a greater understanding
Water is always trying to get to sea level.
The higher up it is the more gravitational energy the water has and so using this it cuts down through the rock more as it has more kinetic energy.
This energy is what enables rivers to carve out magnificent landforms on their way to the sea.
However, this would mean that the land would be worn away quickly but due to subterranean upthrust, landmass is still being pushed up meaning land is never worn away by the rain.

As there is less kinetic energy closer to sea level there is less erosion and so the land levels off. This can be shown by the long profile which shows how the river flows through the ground.
The cross profile shows the type of path the river takes to the sea showing meanders for example. 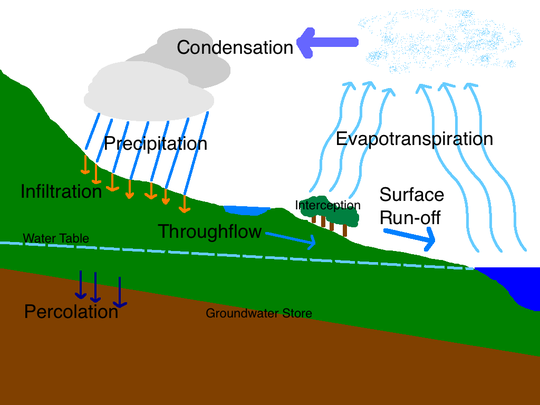 Drainage Basin - The area drained by a river
Watershed - The edge of the drainage basin
Equilibrium - Balance of water going into the river system taking in factors such as frost and flooding
Water Budget - How much water is required to keep the river in equilibrium
Confluence - Where two rivers meet
Tributary - A stream that joins the main channel
Discharge - Amount of water in a channel passing a certain point (measured in cumecs)
Hydraulic radius - The ratio of the cross-sectional area of the channel and the length of its wetted perimeter
Wetted perimeter - The length of the river bed's cross-sectional area that is in contact with water
Cross-sectional area - A cross profile view of a certain point on the river channel
Evapotranspiration - Evaporation of water from a drainage basin from plants and water stores
Condensation - The formation of water droplets in the air forming clouds
Precipitation - The falling of water in any form e.g. rain, snow
Infiltration - The absorption of water into the top layer of soil
Percolation - The absorption of water into harder rock

Source - The start of a river; generally a swamp or bog high up in a mountain range but can sometimes come from springs
V shaped valleys - Steep sided valleys joining at the river. The channel erodes vertically leaving rock bare to weathering and erosion. This layer is removed allowing a new layer to be open to erosion and so the sides become slopes
Gorge (Canyon) - Formed when a waterfall cuts back through a layer of hard rock creating a vertical sided valley. It can also be formed by hydraulic action splitting a gorge into the earth through the rock. They can also be formed when there is an increase in subterranean upthrust causing the river to cut down more severely like at the Grand Canyon.
Potholes - A smooth round hole on the channel floor. This is caused by dips in a hard rock floor being eroded away by abrasion. Smaller rocks get into these dips and eventually start acting like a drill, boring a hole into the floor by scratching away rock from the surface. The drilling power is so powerful that they drill into the floor creating gorges themselves.
Interlocking spurs - Valleys jutting out as the river meanders. Due to there being more vertical erosion the river creates v shaped valleys but the river still meanders; when looking at the cross profile, where the river meanders the valley sides jut in and out of each other like a zip creating interlocking spurs.
Waterfalls - A sudden step in the long profile of a river where the river falls vertically. This happens when the river meets harder rock and due to there being a difference in erosion speed the softer rock gets eroded down quicker revealing the harder rock. Over time the waterfall will retreat as the harder rock get eroded away.
Plunge pool - At the foot of the waterfall a deep pool of water is formed. This is created by the high energy water plunging into the floor eroding it away
Rapids - Areas of disturbed/turbulent water by harder rock in the channel or by an increase in gradient. When there is a series of hard and soft rock creating obstacles for the water making the water turbulent as it hits a series of rocks in the way.
Knickpoint - The point hard rock finishes and meets soft rock. This is the point a waterfall is formed. There can be a series of knickpoints creating steps in the river.
Tor - Round granite boulder left behind when softer rock is eroded from around it.
Scree slopes - Loose material on the side of a valley. 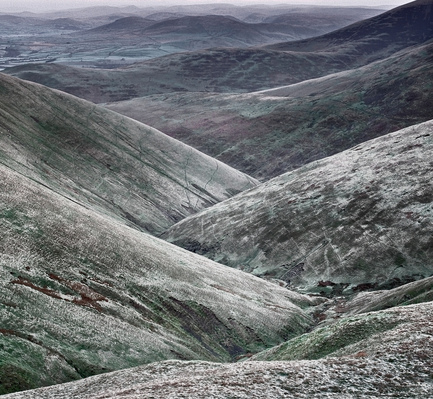 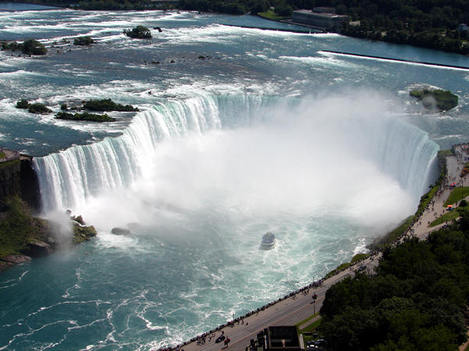 The Niagara Falls, NY, USA and Ontario, Canada are a prime example of an undercut knickpoint / waterfall and plunge pool and gorge. It is believed in a few hundred years the niagara falls will become a series of rapids

Meanders - Bends in the rivers cross profile. Created because the river is moving through the land that will create the least amount of friction.
Ox-bow lake - This occurs when meanders are straight lined leaving a curved lake lying beside the river channel.
Delta - Areas of sediment at the mouth of the river. This happens because the river suddenly slows down as it hits a slower-moving body of water. It creates four types - Cuspate, Arcuate, Bird's foot (Lobate) and Estuarine.
Braiding - When the velocity of the river drops too low the river deposits more material than it transports - this means that the river bed becomes overloaded with sediment and so the river thins out traveling in a random pattern on separate paths. Sometimes leaving temporary islands called braid bars or chars.
Floodplains - The flat area that is susceptible to flooding when the discharge exceeds the cross sectional area of the channel
Levees - A wall or mound that lines the river edge. Naturally occurs by deposition by the river when it floods.
Incised Meanders - Meanders that have steep sides. This occurs when there is a rise in the land causing the river to cut into the land more as it gains more kinetic energy as it's being risen further above sea level.
River Terraces - Steps showing where previous flood plains were
Rejuvenation - When the sea level drops in relation to the land the river gains more kinetic energy and so has more vertical erosion. This means that the river starts to act like it would in the upper course creating a gorge or valley. The sea level drops ether because of the land rising (isostatic) or the sea level dropping (eusostatic).

Hydraulic action - The action of the water hitting the rock erodes the rock away. It can also get into gaps, trapping air causing small explosion breaking the rock apart
Abrasion (corrasion) - Rocks scrape away the bed rock surface
Attrition - When rocks are broken apart by constantly hitting the surface
Corrosion - Rocks are dissolved by the water