Ethanone doesn't exist as it is an aldehyde - ethanal

The C=O bond is called the carbonyl group

Ethanol is incredibly important because they are common intermediates.

They are species that are easily made and easily convert into other compounds.

It can be made from/via:

If ethanol is not produced the other possible product is H2O

Once the solution contains 15% ethanol, the enzymes are unable to function 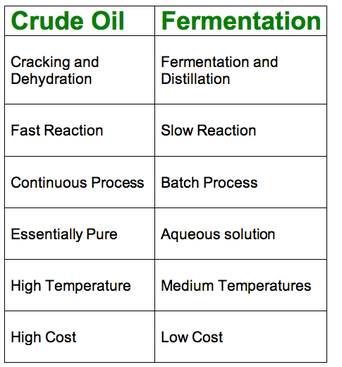 An Aluminium oxide (Al2O3) catalyst is used whilst heated to 600K. (Phosphoric acid (V) is an alternative)

However different alkenes can be formed. Here butan-2-ol forms but-1-ene as well as the two isomers of but-2-ene

Beware! They might continue by asking about one of the products made or about geometric isomerism linking onto other areas of Unit 1. Get an understanding as to where every product can continue onto and its properties.